Visit to Nelson Island and the Five Islands 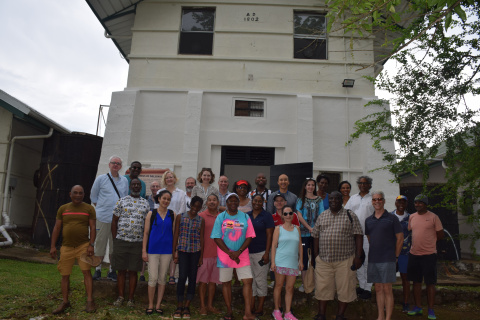 MINISTRY OF PLANNING AND DEVELOPMENT

THE REPUBLIC OF TRINIDAD AND TOBAGO

Remarks by the Honourable Pennelope Beckles,

Minister of Planning and Development

On the Occasion of the

Visit to Nelson Island and the Five Islands

Good afternoon, and welcome to you all. I am really pleased to have you join me, as we visit some of the jewels of our national heritage, Nelson Island, and the Five Islands, which, as Minister with the responsibility for heritage and the environment, I have pledged to promote.

These small rocky islands in the Gulf of Paria, represent many years and layers of Trinidad and Tobago’s history, with demonstrable relevance to many sectors of this multi-ethnic, multi-cultural country of ours. Today, we are literally surrounded by history.

These islands have played roles dating back to the pre-colonial era, when they were used by our First Peoples as trading posts for commerce with their counterparts from the South American mainland.

This building, where we are currently gathered, is the oldest building in continuous use in Trinidad, and was built by enslaved Africans in 1802.

Nelson Island was used as a quarantine island, where new arrivals were held, to ensure that they were disease free. It was later designated as the landing spot for indentured Indian labourers, where they were assessed before being assigned to the various estates. The island was also at one time, given over to various favoured families, to build holiday homes and guest houses. (What period?)

Nelson Island was also used for the incarceration of labour leader Uriah “Buzz” Butler, from 1937 to May, 1939, and again from November 1939, until the end of the Second World War in 1945. During this latter period, German and Austrian Jews who had fled Hitler and settled in Trinidad, were rounded up as enemy aliens, with the men and boys detained on Nelson Island. In 1970, the island would once again serve as a detention centre, this time, for fifty (50) members (leaders and demonstrators) of the Black Power Movement.

Nelson Island was fitted with gun batteries, as part of the outer defence of Chaguaramas, during World War 2. It has also been occupied by the United States Navy and Army, and used for a various camping activities.

Redevelopment of the Islands began in the 1990s, but until 2015, the islands were basically abandoned, despite the construction of the jetty.(where and when was the jetty constructed?)

Since then, the National Trust’s mantra – ‘Where History Comes Alive’ has influenced the many events held on Nelson Island, with thousands of visitors, including school children from all over the country, taking tours of the island.

The National Trust has also developed a partnership with the Water Taxi Service, which augurs well for bringing visitors to the islands. Before the Covid-19 pandemic, National Trust events held on Nelson Island had developed a following, with cultural events like Parang and Punch a Crème, Vintage Calypso, and Ole Time Carnival always attracting sell-out crowds. I am happy to inform you that we look forward to a return to those days, in the not-too-distant future.

Nelson Island is steeped in history, but it is also taking us into the future. This is the only location in Trinidad and Tobago that is totally run on solar power and gets all of its water from a desalination plant. Much has been done, and there is more to come – like new signage to facilitate the self-guided tours, in a couple of months.

So what does the future hold for these islands?

As you will see, Caledonia and Lennigan urgently need decks to facilitate the use of these islands for leisure. The islands are vulnerable to sea level rise, and a research project funded by a grant from the United States government will offer guidance on how to ensure the viability of these islands.

We also have plans to offer cruise ship passengers tours of Nelson Island, when they start visiting Trinidad again. Caledonia will offer cabanas for overnight stays, while pilgrimages will be arranged for Lennigan. All of these plans offer exciting possibilities for funding and new public-private partnerships, and I welcome any ideas from you, our guests for the viable and sustainable development of these islands.