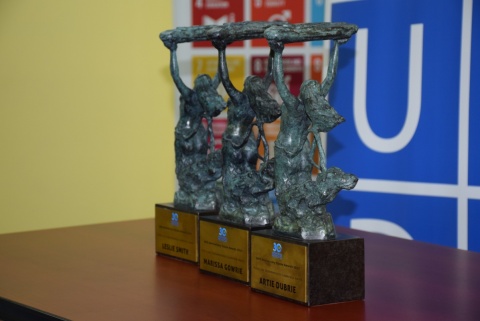 The United Nations Environment Programme (UNEP) held its award ceremony for three recipients of the Policy and Implementation Leadership award last Thursday at United Nations House, Chancery Lane, Port of Spain. The award ceremony was held in recognition of exemplary ozone officers who worked tirelessly in phasing out the use of ozone depleting substances in the English- speaking Caribbean.

The awardees were Deputy Environmental manager/national ozone officer in the environmental policy and planning division of the Ministry of Planning and Development, Trinidadian Marissa Gowrie; Trinidadian Artie Dubrie, sustainable development officer in the United Nations Economic Commission for Latin America and the Caribbean and Grenadian Leslie Smith, national ozone officer for Grenada’s National Ozone Unit, Grenada. Each of these awardees having at least 14 years of experience in implementing environmental programmes designed to significantly reduce the use of ozone depleting substances at the national, regional and international levels.

Their achievements are particularly significant since the depletion of the ozone layer can have negative consequences on humans, animals and plants. Higher UV levels are a direct result of the ozone layer being depleted and can result in skin cancer and have adverse effects on the growth of plants.

Richard Blewitt, UN Resident coordinator and United Nations Development Programme (UNDP) resident representative to Trinidad and Tobago in his opening remarks said that Gowrie, Dubrie and Smith have been so successful in their efforts that the English-speaking Caribbean’s performance has attracted international recognition.

“The region has been successful in completely phasing out the consumption of chlorofluorocarbons, one of the most significant ozone depleting substances in the case of Grenada and Trinidad and Tobago,” said Blewitt. In TT, UNDP has been the implementing partner of the National Ozone Unit since 2009. With the implementation of various programmes in the unit concerned with the phasing out of ozone depleting substances like CFCs and hydro chlorofluorocarbon (HCFC). TT has met the 2010 Montreal Protocol obligation and began the implementation of the HCFC Phase-out management plan in January 2013 in accordance with the Montreal Protocol Schedule.

Several UN official were present including Sharifa Ali-Abdullah, the assistant resident representative of UNDP; Marco Pinzon, the regional network coordinator for the National Ozone Network for the Caribbean, UN Environment Regional office; Joanne Deoraj, Permanent Secretary in the Ministry of Planning and Development and representative to the Grenadian UN ambassador Kariyma Baltimore along with members of the media.

Speaking to the recipients after the ceremony Dubrie who grew up in Rio Claro said, “Receiving the award under the UNEP to me is indicative of the efforts of the UN body in supporting developing countries on environmental good and also an indication of the work in partnership with government and other UN agencies towards the protection of the environment, for collective good.” Gowrie, who grew up in Tunapuna expressed her appreciation by saying, “I am truly humbled to stand alongside people who are true pioneers in the field. This is a collaborative effort to reach to see TT reach this milestone. When it comes to saving the environment every action counts.”

While Smith said that very often ozone officers are seen as unsung heroes.

“We do a lot of great work but not often do we get the recognition. We have been able to successfully phase out 98% of ozone depleting substances so the Montreal protocol recognizes those persons and institutions which has made a contribution in the global right to rid the planet of ozone depleting substances. I am extremely delighted and this is a catalyst for us to do much more with the protection of our environment,” explained Smith.