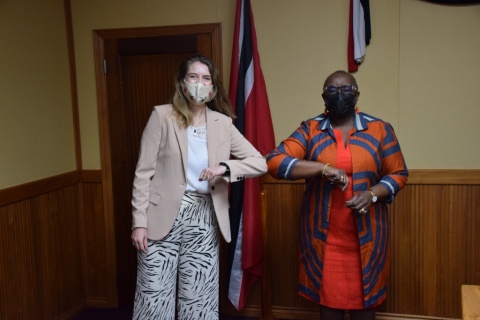 August 21, 2021: Trinidad and Tobago has officially become a member of the Global Ocean Alliance and the High Ambition Coalition for Nature and People.

By joining the Global Ocean Alliance, Trinidad and Tobago has become part of a 54 country-strong alliance, led by the United Kingdom, which aims to protect at least 30 per cent of the global ocean in Marine Protected Areas (MPAs) and Other Effective area-based Conservation Measures (OECMs) by 2030. This is known as the “30by30 target”.

In an official letter to the British Minister of State for Pacific and the Environment, Zac Goldsmith, Minister Robinson-Regis emphasized the Trinidad and Tobago Government’s support for the Global Ocean Alliance’s target to protect 30% of the world’s land and ocean by 2030.

It is only through global alliances and cooperation that we can reach the target to protect at least 30% of the global ocean by 2030. The UK reaffirms its commitment to working with Trinidad and Tobago to increase protection of its precious marine environment and wildlife.”

Trinidad and Tobago as a small island developing state is highly dependent on ocean resources for food and minerals, and its archipelagic waters, territorial sea and exclusive economic zone, is 15 times greater than the land surface area.

A great deal of activity in T&T happens in or near the coast.

Trinidad and Tobago’s membership of the Global Ocean Alliance and High Ambition Coalition (HAC) for Nature & People will serve to benefit the country’s environment as well as its economic activity. The Central Statistical Office estimates that almost 80% of all socio-economic activities and 70% of Trinidad and Tobago’s population are located along the coast. Becoming a member of the HAC will demonstrate multilateral and cooperative global leadership, and thereby afford Trinidad and Tobago a voice in advancing the need for support to achieve its own conservation and preservation objectives, and effective management of protected and conserved areas, including through financing efforts. The HAC for Nature and People, which is led by Costa Rica, France and the United Kingdom, is an inter-regional group established to reverse the severe trend of biodiversity loss and revive ecosystems that are critical to species and humanity’s survival. It will also promote the integral role that additional terrestrial and marine protection must play in the mitigation of greenhouse gases under the United Nations Framework Convention on Climate Change (UNFCC).

Terrestrial as well as marine protection is important for the mitigation of greenhouse gases.

Scientific evidence indicates that effective protection of at least 30 per cent of the global ocean will help to reverse adverse impacts, preserve fish populations, increase resilience to climate change, and sustain long-term ocean health. It also serves as a good example of a nature-based solution/ecosystem-based approach.

Minister Robinson-Regis and British High Commissioner Cross share the view that this new partnership will strengthen Trinidad and Tobago’s environmental goals. It adds to much of the work already being done by the Ministry of Planning and Development which is charged with environment through its various Divisions and State Agencies.

Trinidad and Tobago initiated policy reforms aimed at preventing biodiversity loss and improving the management of protected areas (PAs), with the adoption of new PA and Forest policies in 2011 and a new National Wildlife Policy in 2013.

Joining the Global Ocean Alliance and High Ambition Coalition is a definite step in enhancing results in this regard while supporting Theme 5 of T&T’s national Development Strategy: Vision 2030, which places ‘the Environment at the Centre of Social and Economic Development’