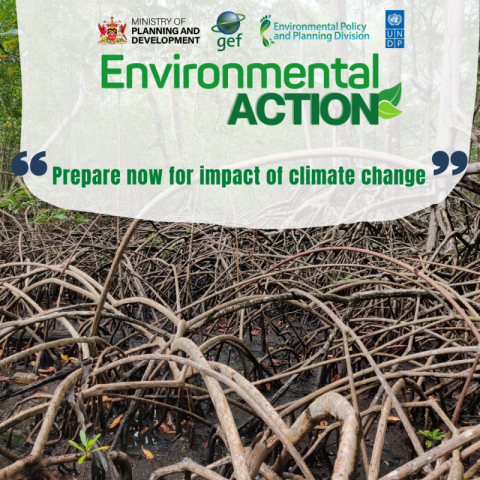 June 6, 2021: Two new studies have found that Trinidad and Tobago is already experiencing the effects of climate change and warn that without swift action to mitigate its impact, the country risks serious social and economic consequences.

The VCA Report listed several tangible impacts of climate change. These include declines in agricultural production and the supply of drinking water; an increase in vector-borne diseases; coastal erosion in both islands; and threats to the country’s most famous natural heritage asset, Tobago’s Main Ridge Forest Reserve.

It found that higher air temperatures leading to greater water evaporation, rising sea levels and salt water intrusion into groundwater supplies, and projected climate risks of lower precipitation are reducing the national supplies of drinking water and fresh water. Higher ambient temperatures resulting in soil aridity coupled with soil salinisation due to sea level rise, are leading to a reduction in crop yields. Aquatic and land species whose survival depend on rivers are also impacted by decreases in rainfall, and are under added stress due to the pollution of watercourses and waste discharges from industries and homes.

The report also linked the recent succession of mosquito-borne diseases such as Dengue, Chikungunya and Zika to temperature increases and changing rainfall patterns.

The VCA Report expresses concern about the increasing vulnerability of Tobago’s world-renowned Main Ridge Forest Reserve to the forces of climate change as a result of slash-and-burn agriculture and wanton felling of tall trees.

Noting that 80 percent of the Trinidad’s economy and 70 percent of the population are located on coastal areas which are susceptible to the impact and influence of climate change, the VCA Report warns that climate change is a clear and present danger to the country’s economic viability and the safety of its people.

Using current data and global climate simulation models, the studies projected the impact of climate change on Trinidad and Tobago by 2030 and 2050. It found that by 2030, air temperatures are likely to rise by an average of 0.5 degrees Celsius and by approximately one degree Celsius by 2050. The impact of this, among other things, will be a slight decrease in rainfall by the dry season of 2030 which will worsen in 2050.

Over the period, rising sea levels and storm surges are projected to increase flooding and coastal erosion along Trinidad’s eastern Atlantic coast and the Gulf of Paria on the west. In Tobago, rising sea levels compounded by flooding from a Category 2 or a Category 5 hurricane will have a devastating impact on agricultural lands, hotel resorts along the coast, private residential and resort infrastructure in coastal zones and popular beachfront properties at Buccoo Bay and some coastal villages.

In advocating for an urgent and comprehensive package of adaptation and mitigation measures, the VCA Report warns of the many perils this country would face if it fails to act now. These include risks to the national food and water supply and damage to physical infrastructure, cities and settlements, oil and gas assets, industrial estates, public health, beaches and the tourism economy, fisheries stock and vital natural heritage such as the Main Ridge Forest Reserve.

To mitigate these impacts, the VCA Report recommended an integrated package of short, medium and long-term measures across the public sector.

These include water management and protection strategies; incorporation of climate change as a public health risk with supporting data; evaluation of the National Food Production Action Plan to enhance productivity and profitability; integration of disaster risk management and climate change adaptation; repair of revetments to address coastal erosion, instability and flooding along Trinidad’s coastline; and the promotion of environmental literacy with greater involvement of civil society.

Institutionally, the report urges capacity-building and the strengthening of processes and collaboration; improved screening of applications within the Town and Country Planning Division with future policy and climate change in mind; development of building guidelines based on international best practices in the absence of a national climate-resilient building code; the formal mandating of meaningful involvement of Civil Society in the national response to climate change; financial and other support for vulnerable livelihoods; stronger data and information to support decision-making; and attitude surveys in coastal communities to establish what is known about climate change risks and adaptation.