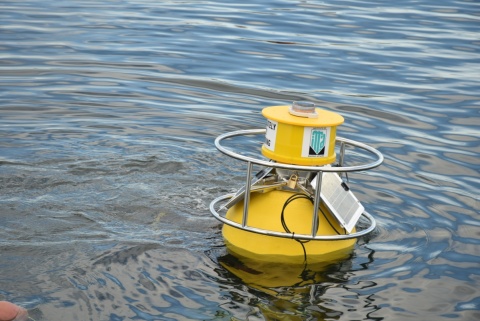 In a public private partnership, the Honourable Camille Robinson-Regis, Minister of Planning and Development through the Institute of Marine Affairs (IMA) in collaboration with Microsoft, Fujitsu Caribbean, Digicel and the fishing community of Claxton Bay, Otaheite and environs installed the Water Quality Monitoring Buoy, as a proof of concept, on Wednesday October 25th, 2017 approximately a mile and a half off the coast of the Claxton Bay Fishing Depot, Claxton Bay.

The Water Quality Monitoring Buoy is an initiative using state of the art technology aimed at addressing marine pollution and other environmental matters in the Gulf of Paria.  The specially designed buoy is equipped with underwater sensors positioned to provide real time data and critical insight into levels of pollution and other changes to the marine environment that can better inform stakeholders about environmental incidents such as previously untraceable oil spills and previously inexplicable fish kills. It also carries Yellow  Springs Instruments (YSI) sensors and hardware to measure salinity, temperature, dissolved oxygen concentrations, pH, turbidity and hydrocarbon levels; a digital cellular connection provided by Digicel; a cloud platform provided by Microsoft Azure, and an Internet of Things (IoT) platform to filter and process all the information, provided by Fujitsu Caribbean.

Dr. Rahanna Juman, (Ag) Deputy Director of the IMA explained that “The project came as a direct response to the IMA’s investigation of fish kills and oil spills in the Gulf of Paria in recent months and the private partners sector also responded through the use of their resources to do their part for the national interest”. The Honourable Camille Robinson-Regis, Minister of Planning and Development on the impact of this project stating, “ It is a scientific solution to a feature of our existence that we have, too often, left to anecdotes and superficial inquiry”.  Minister Robinson-Regis added that the data collected on a real time basis will allow state agencies to act proactively to solve problems rather than react to the issues after the fact and in some cases when it is too late.  This data will be uploaded frequently and the plan is to make it available to the public via a mobile application or app which is in the process of being developed.  The Ministry of Planning and Development praised the efforts of the private sector agencies who worked together on this and hopes for more collaborations to environmental and social problems in the future.

This project represents a critical partnership between government, private sector entities, and stakeholders such as the Claxton Bay Fishing Community to collect pertinent scientific data to make evidence based decisions. Based on the success of this buoy, an effort will be made to have more installed in the marine space around Trinidad and Tobago.