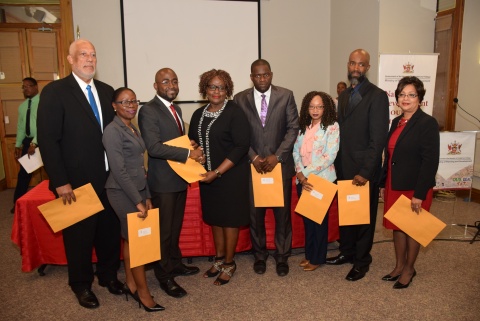 Friday July 21, 2017:
The Honourable Camille Robinson-Regis, Minister of Planning and Development officially inducted the Board of Governors of the Institute of Marine Affairs, handing the members their Instruments of Appointment at a ceremony in the Old Fire Station on Abercromby Street in Port off Spain.

Minister Robinson-Regis highlighted the environmental challenges brought about by our own actions and charged the Board with the task of also educating and empowering as many of our citizens as possible to help make the positive environmental changes necessary.  During the small ceremony, another Board introduced, the Green Fund Advisory Committee, Chaired by for Central Bank Governor, Mr. Ewart Williams.

The Minister stressed the following to both Boards:
“You begin your tenure at the IMA and the Green Fund at a time when the environment, both land and marine, are under considerable threat. These threats arise from a combination of factors, not least of which is our predilection as citizens to be authors of our own misery. How else does one explain a bonfire being set on a beach that is known to be a nesting site for our leatherback turtles that results, based on reports, in about 80 hatchlings literally being roasted alive? How else do we explain the tonnes of garbage illegally disposed along river banks and in watercourses that contributed in no small way to the flooding experienced in the aftermath of Tropical Storm Bret?
While it is unfortunate, we cannot legislate our way out of the detrimental environmental attitudes that pervade our national community. Now, as you become part of the environmental governance architecture, your jobs will be to empower as many individuals, communities, NGOs and CBOs, and faith-based organizations, among others, to change behaviours and attitudes that would result in a marked improvement in our respect for the environment.”