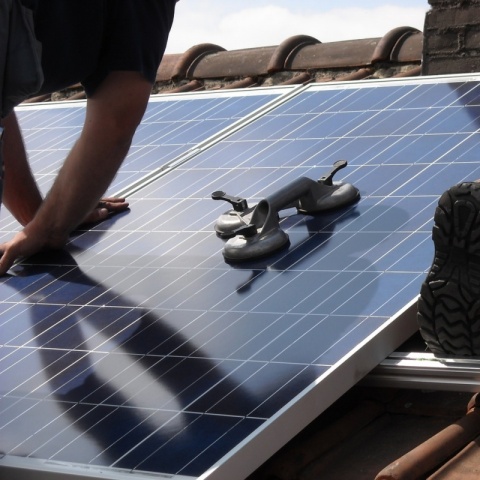 AUGUST 13, 2021: The Honourable Camille Robinson-Regis, Minister of Planning and Development, extends congratulations to 12 communities in Trinidad and Tobago selected to receive grants in the form of installations of small-scale roof-mounted Solar Photovoltaic (PV) solar panels. These solar panels will be used to supply energy for power generation.

This initiative forms part of the partnership between the Government of Trinidad and Tobago and the European Union through the Global Climate Change Alliance Plus (GCCA+) from which EURO €2.4 million was contributed for the project by the EU. The Planning Minister states that this programme aims to assist Trinidad and Tobago’s goal to decrease its carbon emissions, and increase our climate resilience in keeping with its Government’s stated targets and commitments under the 2015 Paris Agreement.

Minister Robinson-Regis also adds that in light of the dire climate change report recently released by the International Panel on Climate Change (IPCC), which states that we are living in one of the greatest periods of warming in the world’s history, Trinidad and Tobago is making strides in the right direction.

The recipient sites were selected from 164 applications received after a public call for Expressions of Interest, in July 2020. Of 26 sites that were shortlisted, these final 12 represent a cross-section of NGOs, micro-enterprises, cooperatives, and public institutions, situated in urban, and developing and remote communities across both Trinidad and Tobago. The 12 recipients of the solar panels include:

· The Division of Food Production, Forestry and Fisheries – Tobago House of Assembly

The Planning and Development Minister reiterates her pride in these communities and organisations as well as all the participants for their efforts and the willingness to help mitigate against the effects of climate change.

The GCCA+ Project, which is a global initiative, involves the European Union (EU) as the donor partner, in collaboration locally with the Government of Trinidad and Tobago through the Ministry of Planning and Development and the Ministry of Energy and Energy Industries. The United Nations Development Programme (UNDP) is on-the-ground as the implementing partner, bringing to bear a strong track record of project management, and access to a well-developed global network of expertise and frameworks, that will serve to support the various technical and resource enhancing aspects of the project in Trinidad and Tobago.

Minister Robinson-Regis further stated: “The Government of Trinidad and Tobago is committed to implementing its obligations and commitments under the Paris Agreement, which includes achieving net-zero in the second half of this century as a national priority. This partnership with the EU’s GCCA+, is another step towards attaining net-zero emissions, not only contributing to the objectives of the Paris Agreement and the International Solar Alliance (ISA), but also fulfilling Trinidad and Tobago's national priorities, outlined in the National Development Strategy – Vision 2030 – under Theme V, ‘Placing the Environment at the Centre of Social and Economic Development’, while also attaining SDG13 - Climate Action.”

Minister Robinson-Regis identified that a carbon reduction strategy is well underway for the three main sectors responsible for emitting the most carbon: power generation, transport and industrial sectors. She reiterated Government’s commitment to work towards the development of legislation to facilitate the addition of renewable energy sources in Trinidad and Tobago.

H.E. Peter Cavendish, EU Ambassador to Trinidad and Tobago, also congratulated the 12 finalists, and stated: “We all know that the climate crisis is one of the most enduring challenges of our time. While every country is at risk because of climate change, it is a well-known fact that Small Island Developing States (SIDS), like Trinidad and Tobago, are among the most vulnerable to its negative impacts. It is for this reason that the EU developed the GCCA+ initiative, to support SIDS to adapt to and mitigate climate change, and to assist their efforts to achieve their climate commitments under the Paris Agreement. We are therefore happy to support Trinidad and Tobago in this endeavour, and we look forward to the additional benefits that will redound to this country and its citizens as the project unfolds.”

The installation of solar panels means that these 12 finalist sites will benefit from greater energy efficiency and reduced carbon emissions. In addition, the GCCA+ Project Team in partnership with the Government, will provide specialised maintenance training to upgrade the skills of local technical teams to support the beneficiary organizations in maintaining the installations. The 12 finalist sites are currently undergoing summary technical inspection for confirmation of system compatibility and safety specifications, including positive inspection results from the requisite local authorities prior to GCCA+ final approval. The projected timeline for completion of panel installation is the first quarter of 2022. Beneficiaries of this project will be encouraged to share their experiences with the communities in which they operate, to encourage others to follow suit.

Randi Davis, Resident Representative of the UNDP to Trinidad and Tobago, Aruba, Curacao, and Saint Maarten, has expressed her gratitude to both the EU and the Government of the Republic of Trinidad and Tobago, for making this project a priority focus, she stated: “The UNDP is pleased to be a partner in the GCCA+ Trinidad and Tobago project, and sees this as a positive step towards realizing the Sustainable Development Goals. The outcomes of this project will demonstrate to other SIDS that the advancement of solar energy as a clean and sustainable source of power generation is achievable in their countries.”

The strategic remit of the GCCA+ Project Team includes the execution of a Public Awareness Raising Campaign. The campaign aims to sensitize the public about the benefits, accessibility, correct pricing, and affordability of solar power as a source of clean, sustainable, and renewable energy. This project is particularly relevant to the diversification of power generation in energy-based economies such as Trinidad and Tobago, and we look forward to its successful implementation.