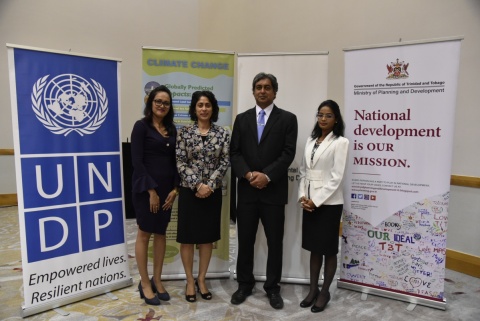 December 14, 2017 Port of Spain, Trinidad and Tobago- Climate Change has the potential to derail almost every (if not all) efforts towards sustainable development globally. In concert with other forces (political, social and economic) it amplifies and hastens the negative impacts which altogether imperil the ability of the entire global ecosystem to be resilient.  To address these challenges at the local level, the Honourable Camille Robinson-Regis, Minister of Planning and Development with responsibility for the environment is fully supporting a collaborative project with the United Nations Development Programme (UNDP) and the Global Environment Facility (GEF).  The Project entitled: Preparation of Trinidad and Tobago’s Third National Communication and First Biennial Update Report to the United Nations Framework Convention on Climate Change (UNFCCC) is being undertaken with the Ministry of Planning and Development as the executing entity.  Trinidad and Tobago is the one of 38 participating countries and the only small island developing state (SIDS) participating.
On December 14, 2017 the Multilateral Environmental Agreements Unit of the Ministry of Planning and Development facilitated an Inception Workshop with public sector institutions, private sector representatives, NGOs as well the UN and the IDB to begin the way forward for the preparation of the next report.  These sectors are key players since Trinidad and Tobago is committed to a reduction in greenhouse gas emissions of 30% by December 31, 2030 in the public transportation sector equivalent to 1,700,000 million tonnes of carbon dioxide and a decrease of 15% by 2030 in the other main carbon emitting sectors such as industry and the petrochemical sector which is equivalent to 103 million tonnes of carbon dioxide.  Some of the private sector organisations working with the Planning Ministry on this include BHP, BP, Shell, Petrotrin, Atlantic Energy and the Ministry of Energy and Energy Industries.
Developing these reports, called National Communications, will facilitate the collection of information and data necessary to address and reduce the socio-economic effects of climate change and improve environmental quality.  Trinidad and Tobago in the last decade has suffered hundreds of millions of dollars in losses arising from extreme weather events such as flooding and droughts, and the data obtained through the process of developing these reports will help to significantly reduce the amount spent in the future.
In the country context, preparation of National Communications provides a status report of greenhouse gas emissions locally while giving an account of mitigation actions undertaken as well as an assessment of how vulnerable we are as a nation. This kind of report tells us where we are, and obviously can then direct where we ought to be going to achieve the goals of the National Climate Change Policy as well as the ultimate objectives of the UNFCCC.