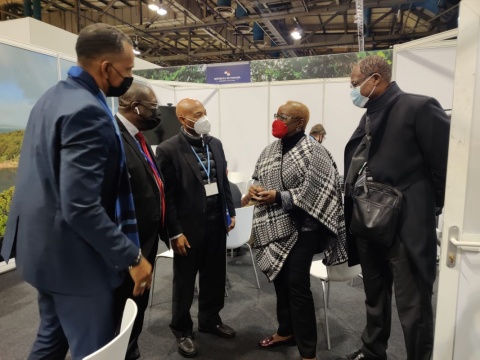 Planning and Development Minister Camille Robinson-Regis announced that Trinidad and Tobago has been at the centre of discussions with a number of institutions and leaders focusing among other things, on the topic of climate financing arrangements to reduce greenhouse gas emissions globally, but with specific focus on Small Island developing States (SIDS) such as those of the Caribbean Region.

Speaking from Glasgow, Scotland, Minister Robinson-Regis, who is the Head of Trinidad and Tobago’s Delegation for the High Level Ministerial Summit as part of the ongoing global climate change conference, COP26, has met with representatives of the Caribbean Development Bank (CDB); the Carbon Pricing Leadership Coalition (CPLC); the Prime Minister of Fiji, Hon. Frank Bainimarama; the Commonwealth Secretary General, Patricia Scotland and Ministers of the Environment from Uganda, Zambia and Namibia.

Minister Robinson-Regis also serves as Governor of the Caribbean Development Bank for Trinidad and Tobago and in discussions with Dr. Hyginus “Gene” Leon, the Bank’s President, sought to identify ways of ensuring the availability of financing for Climate Adaptation Projects in the region and the fact that the Bank is developing a measure of the economic, social and environmental vulnerabilities to ensure that Small Island Developing States (SIDS) have access to the right level of support and resources in the future.

The CDB’s key observations are focused on ‘Rescue, Recovery and Resilience’ and the Minister is of the clear view that these are major issues for the Caribbean Region and for SIDS generally. It was agreed that is an arena where financing is key for forward movement and the CDB’s role will definitely continue to be invaluable. The Planning Minister and the CDB also committed to continued collaboration ensuring that the Region’s needs are prioritised throughout COP26’s High Level Ministerial Summit.

In furtherance of representing SIDS and the region, Minister Robinson-Regis also participated in the Carbon Pricing Leadership Coalition (CPLC) and En+ Group’s Joint Panel discussion on the ‘Road to Net Zero: The Role of Carbon Pricing’. According to their profile, the En+ Group is the largest producer of low-carbon aluminium globally and biggest “independent renewable energy generator”. This also included multilateral meetings with Lord Barker, Executive Chairman of En+ Group, CPLC High-Level Assembly Co-Chair and Minister Juan Carlos Jobet, Minister of Energy, Chile, who is the CPLC High-Level Assembly Co-Chair.

The leaders shared the need for policymakers to bring in an effective system of carbon pricing to facilitate the free flow of low-carbon goods, building the clean and economically viable supply chains of the future. The focal points of the session included: Public and private sector collaboration to advance the net-zero ambitions through carbon pricing; incentivising the market towards cleaner methods of production and energy sources while creating green jobs and resilient communities; what is needed to build climate-resilient, clean and economically viable supply chains of the future. One key area of interest to Trinidad and Tobago businesses and manufacturers includes carbon pricing and green trade liberalization to contribute to the promotion of low-carbon goods.

In a third multilateral meeting with the Prime Minister of Fiji, Hon Frank Bainimarama, the Commonwealth Secretary General, Patricia Scotland and Ministers of the Environment from Uganda, Zambia, Namibia; Minister Robinson-Regis shared Trinidad and Tobago’s commitment regarding the ‘Call to Action on Living Lands’. Commonwealth leaders pledged to take decisive action on these issues at the next Commonwealth Heads of Government Summit. Secretary-General Scotland said: “Commonwealth countries are working towards a pioneering ‘Commonwealth Call to Action on Living Lands’, to reinforce efforts to tackle the climate crisis, land degradation and biodiversity loss as three inter-linked challenges.”

Minister Robinson-Regis shared Trinidad and Tobago’s actions to date which feature remediation of Trinidad and Tobago’s landfills; a Mangrove Soil Carbon Sequestration Assessment with the Institute of Marine Affairs; successful biodiversity conservation programmes with the Sea Turtle Task Force and recently granting the Scarlet Ibis environmentally sensitive species status. A Forest and Protected Areas Management Project with the Food and Agriculture Organization also yielded an increase in the number and square footage of protected marine and terrestrial spaces in Trinidad and Tobago.

One key goal of Minister Robinson-Regis’ role as the Head of Delegation for the High Level Ministerial Summit is to work with CARICOM partners regarding a negotiating strategy to enhance climate change mitigation efforts; closing the climate finance gap, and enhancing support for CARICOM members to implement their Nationally Determined Contributions (NDCs) and National Adaptation Plans (NAPs). In addition to climate financing, issues relating to loss and damage also remain high on the Minister’s agenda in Glasgow, as Small Island Developing States (SIDS) are already experiencing losses and damages as a result of climate change.

WHAT IS CARBON PRICING

According to the World Bank, carbon pricing is an instrument that captures the external costs of greenhouse gas (GHG) emissions—the costs of emissions that the public pays for, such as damage to crops, health care costs from heat waves and droughts, and loss of property from flooding and sea level rise—and ties them to their sources through a price, usually in the form of a price on the carbon dioxide (CO2) emitted.

A price on carbon helps shift the burden for the damage from GHG emissions back to those who are responsible for it and who can avoid it. Instead of dictating who should reduce emissions where and how.

How this benefits Trinidad and Tobago is that we can use funding agreed to as part of the Paris Agreement in 2015 as a source of revenue as well as an instrument of the climate policy package needed to reduce emissions, which is particularly important in an economic environment of budgetary constraints.