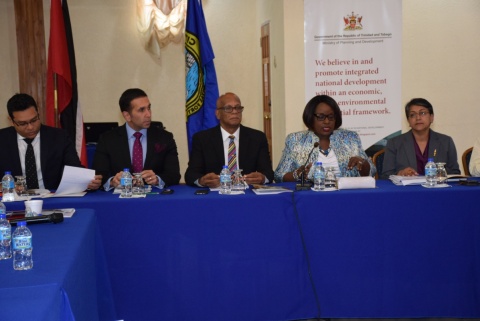 The Honourable Camille Robinson-Regis, Minister of Planning and Development conducted a meeting with the major stakeholders involved in the execution of the San Fernando Waterfront Redevelopment Project on Wednesday November 29, 2017 at the San Fernando City Corporation’s Auditorium on Harris Promenade in San Fernando.

The Ministry of Planning and Development has oversight of the San Fernando Waterfront Redevelopment Project and is working closely with the other executing agencies namely the San Fernando City Corporation, the Land Settlement Agency (LSA), the Public Transportation Services Corporation (PTSC) and the Urban Development Corporation of Trinidad and Tobago (UDeCOTT).   Also in attendance were San Fernando West MP and Attorney General Faris Al-Rawi; San Fernando East MP and Minister of Housing and Urban Development Randall Mitchell; Agriculture, Land and Fisheries Minister Clarence Rambharat; Adrian Leonce, MP for Laventille East/Morvant and San Fernando Mayor Junia Regrello.
According to Minister Robinson-Regis, the purpose of the meeting was to discuss the current stages of development of Phase 1 of the project and to make decisions on the way forward and as San Fernando West MP Faris Al-Rawi stated to move the project from years of “analysis paralysis” to action.

San Fernando Mayor Regrello indicated his willingness to start the project, which he has been awaiting for over a year and pledged his support, especially for the elements within his purview.  Some other matters raised were the socio-economic benefits of the project to the citizens of San Fernando regarding the creation of spaces for the facilitation of business creation, opportunities for recreation, the possibility of viable public-private partnerships and according to Minister Mitchell opportunities for housing and job creation.
It was agreed that the Redevelopment of the San Fernando Waterfront will become a reality and all of the agencies will complete the necessary project timelines and the method statement.  The Caribbean Development Bank (CDB) will be conducting a special mission from December 4-7, 2017 to explore the possibility of providing support through grant funding for the project.
This project is linked to the Vision 2030 goals outlined in the National Development Strategy of 'Putting people first: nurturing our greatest asset'; 'Improving productivity through quality infrastructure and transportation' and ‘Placing the environment at the centre of social and economic development’.

BACKGROUND
The Redevelopment of the San Fernando Waterfront has the potential to be a signature project for the City of San Fernando and by extension the country. It is anticipated that this redevelopment will be beneficial to residents, business owners and commuters. Resultant socio-economic benefits include employment opportunities, international and local tourism, expansion of the business sector, development of leisure facilities, increased family oriented spaces and activities, preservation of historical assets and growth of the creative sector.

EXPECTED START AND COMPLETION DATES
The duration of Phase 1 of the San Fernando Waterfront Redevelopment is 2 years. Key elements of the project have already commenced from 2017 such as social surveys, the framework for the development of the heritage district has been developed and 25 hectares of land have been allocated by the Commissioner of  State Lands for the relocation of the PTSC maintenance facility.

PHASE 1 OF THE SAN FERNANDO WATERFRONT REDEVELOPMENT PROJECT
In April 2017, the Government of Trinidad and Tobago approved the Implementation Plan for Phase I of the San Fernando Waterfront Redevelopment comprising four projects which will create the spaces and opportunities for future investment and redevelopment.  These projects are as follows:

1.     The Upgrade of the Plaza San Carlos Historical District for commercial and heritage activity. The area will feature high quality public spaces alongside revitalised and repurposed heritage buildings. An assessment of the historical value of the buildings in the District along with remedial works are therefore key elements of this project. Another major aspect of this upgrade is the preparation and enactment of development guidelines and protocols for all properties within the historic district.

2.     The Reclamation of 3.8 hectares of land at King’s Wharf North to facilitate a Water Taxi Terminal and opportunities for public and private sector development.  Prior to reclamation, environmental studies will be conducted and a site plan will be prepared.

3.     The Relocation of the Public Transport Service Corporation (PTSC) Garage and Maintenance Facility at Lady Hailes Avenue which serves PTSC’s operations in South Trinidad to lands identified in Tarouba.

4.      The Relocation of the informal settlers at King’s Wharf North who reside along the former Trinidad Government Railway line. The relocation  exercise will involve the conduct of an up-to-date site profiling exercise to:

Please note that the no final sites have been allocated for relocation.


EXECUTING AGENCIES
The Government of Trinidad and Tobago has identified the following executing agencies to undertake the management and execution of Phase I projects:

·       Reclamation of 3.8 hectares of land at King’s Wharf North- Urban Development Corporation of Trinidad and Tobago