Electronic Waste – An emerging Threat to our Marine Environment 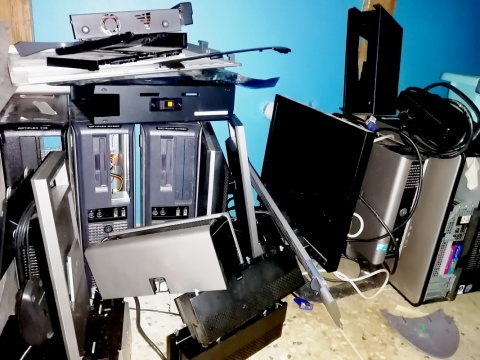 Electronic Waste – An emerging Threat to our Marine Environment

Additionally, universities and tertiary institutions transitioned to providing online learning to enrolled students. The Ministry of Education declared the virtual classrooms for the nation’s pupils for the new academic calendar, which began in September 2020. All of this arose from concerns surrounding the possibility of a worsening spike in community spread of COVID-19 cases. This shift to virtual classrooms, online learning, e-government services, and e-banking services saw a surge in demand for laptops, tablets, smartphones, Internet of Things (IoT) devices and other electronic gadgets within the last six months. No doubt, these devices have made our lives more convenient, but did we ever stop to think what happens to all these electronic devices as waste at the end of their life span or how our electronic waste (e-waste) is managed?

According to Britannica.com, electronic waste or e-waste can be defined as any type of electric and electronic equipment that becomes obsolete or is irreparable and include our household appliances and major and minor equipment used in the field of information communication technologies (ICT). If unsustainably discarded, these gadgets and devices contain toxic substances that can prove harmful to human health and the environment. Public awareness is paramount to manage e-waste, which is becoming one of the fastest growing waste streams in the world. According to the Global E-Waste Monitor 2020 published by the United Nations, a staggering 53.6 million metric tonnes of e-waste were generated in 2019 of which 45 million metric tonnes were either dumped in landfills, burned or discarded in an unsustainable way. In its 2016 Global E-Waste Monitor Report, the United Nations University (UNU) also estimated that Trinidad and Tobago generated 22 thousand tonnes of e-waste. Established by the WEEE Forum, a not-for-profit international association and endorsed by the United Nations Environment Programme (UNEP), October 14 has been declared International E-Waste Day every year since 2017. The objective is to raise awareness on, and promote environmentally sustainable disposal methods for e-waste throughout the world.

E-waste, once it leaches into our environment, can affect our immune systems and overall health. Toxic substances such as lead, generally contained in computer and laptop monitors, is known to affect kidney functions and the central nervous system in humans. According to a World Health Organisation Report published in 2008, entitled 'GUIDANCE FOR IDENTIFYING POPULATIONS AT RISK FROM MERCURY EXPOSURE', mercury, found largely in several household appliances such as refrigerators and microwaves, was discovered to contribute to liver damage in humans putting young children and developing fetuses at risk.

Management of our e-waste is paramount. When you invest in a new device, consider too what you will do when the product reaches the end of its economic life, and have a plan for its recycling, repurposing and disposal. Support firms that provide a recycle, reuse and disposal plan for the gadgets they sell. Save our planet, be responsible!

Bonanno, A. et al. (2017). "Levels of heavy metals in wetland and marine vascular plants and their