Trinidad and Tobago and Spain work to intensify economic, educational and cultural ties 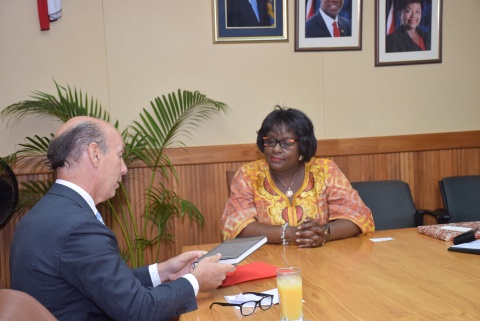 The Minister of Planning and Development, the Honourable Camille Robinson-Regis hosted a courtesy call from His Excellency Javier Carbajosa, Ambassador of the Kingdom of Spain on Thursday July 6th, 2017. This year, Trinidad and Tobago and Spain will celebrate 50 years of diplomatic relations which will be marked by a visit from the Secretary of State for International Cooperation and for Latin America (Ministry of Foreign Affairs and Cooperation of Spain). Spain has always maintained a close relationship with Trinidad and Tobago as a development partner and more so through the Inter-American Development Banks (IDB) and the Caribbean Development Bank (CDB).

During the discussion on potential areas for collaboration, Ambassador Carbajosa noted that both countries have maintained a close relationship which can be further intensified. The Ambassador expressed that the use of Spanish as a second language should be promoted in Trinidad and Tobago as it will give the country a competitive edge in the globalised business environment.

According to the Ambassador, the picture of Trinidad and Tobago in Spain is clear- a stable democracy with high levels of economic progress while at the same diversifying the economy. The Ambassador expressed Spain’s continued interest in maintaining a cultural presence in Trinidad and Tobago, which will be further deepened through a Memorandum of Understanding on Cultural Matters to be signed by both countries. Spain is the 2nd largest investor in Latin America and the Caribbean Region and sees itself as a natural bridge between this Region and the European Union. The visit produced fruitful discussions and is expected to continue with another visit from the Spanish delegation.