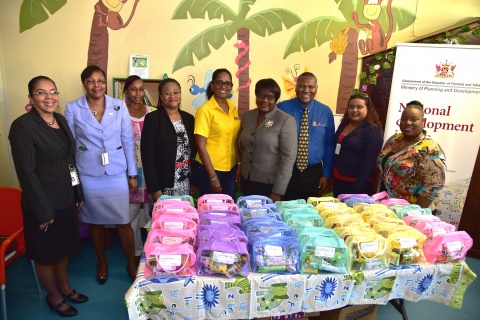 The Ministry of Planning and Development brought true meaning to the saying ‘small acts of kindness can go a long way’. It is with this hope of charity that staff of the Ministry provided children and families at the Just Because Foundation (JBF) with care packages for their overnight stays at the facility.

The Just Because Foundation was unanimously selected as the Corporate Social Responsibility (CSR) initiative for 2016/2017 and was strongly endorsed by the Honourable Camille Robinson-Regis, Minister of Planning and Development and equally supported by the Permanent Secretary Mrs. Joanne Deoraj. During the months of November and December 2016, staff rallied together and collected various toiletry items including toothpaste, toothbrushes, deodorant, baby oil, floss, wipes, shampoo and much more to make care packages to be used by both parents and patients when there is need for unplanned overnight hospital care at the Wendy Fitzwilliam Paediatric Hospital, Eric Williams Medical Sciences Complex, Mt. Hope.

Through the efforts of the staff one hundred and fifty care packages were distributed to the Foundation on Wednesday 22nd February, 2017 at the Wendy Fitzwilliam Paediatric Hospital, Eric Williams Medical Sciences Complex, Mount Hope. Minister Robinson-Regis commended the staff for insisting and ensuring that they provided over one hundred care packages and stated, “I am happy the Ministry of Planning and Development participated in the donation of packages to the JBF as part of their CSR.”

It was expressed by one of the founders of the Just Because Foundation Noel Joseph that these care packages are ‘like precious gold’ to some parents as it alleviates some of the immediate cost associated with taking care of their children.

Minister Regis noted she could identify with some the issues faced by many cancer penitents and their families as her daughter at the age of twenty four was diagnosed with breast cancer. Minister Regis congratulated the JBF for bringing hope to children with cancer and presented packages to the co-owners of the JBF Noel and Chevaughn Joseph and children at the ward.

Annually, the Ministry of Planning and Development’s Staff and their Executive coordinate a CSR initiative for the less-fortunate or displaced in society. In 2015 the staff worked together with the Salvation Army of Trinidad and Tobago to provide used clothing to the organization as well as volunteering to prepare meals in the Salvation Army’s Feeding Programme. The year’s CSR is expected to continue to touch even more lives in society. About the Just Because Foundation The Just Because Foundation (JBF) was incorporated in August 2007 as a non-profit, Paediatric Cancer Support Organization.

The Foundation was established by Noel and Chevaughn Joseph after losing their 5 1/2 year old son Jabez “JB” Joseph to Alveolar Rhabdomyosarcoma, a rare form of childhood cancer. The JBF provides emotional, practical and social support for families of children with cancer. They offer short term housing for families who travel from remote areas in Trinidad and Tobago and from other Caribbean countries with their child for chemotherapy or radiation treatment in Trinidad. The Foundation transports children and parents to and from treatment centres. Support is also provided for the siblings of the sick child because they often fall into the shadows because the focus often shifts away from them to the child with cancer.

The JBF offers counselling for the entire family as well as bereavement support. Additionally, literature on the various forms of treatment; explaining what to expect during and after treatment, possible side effects, and outline the methods of caring for the child are provided.