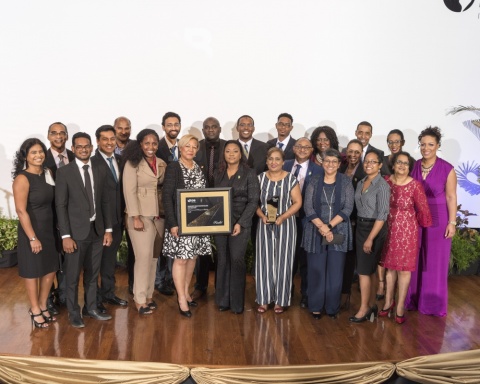 Thursday December 5th, 2019: The Minister of Planning and Development, the Honourable Camille Robinson-Regis is once again lauding the outstanding work of the iCARE programme, as she congratulates the team on its People’s Choice win at the President’s Awards for Service Excellence and Innovation in the Public Sector. In her congratulatory message, the Minister, who has responsibility for the national environmental portfolio and the iCARE initiative said, “I am extremely proud of the deserving recognition given to the iCARE programme for winning the People’s Choice Award in the category of Service Excellence. Such a noteworthy accolade is testament to the vision and hard work of the entire team, and I would like to thank each and every person who has contributed and is contributing to make this project a success.”

The President’s Awards for Service Excellence and Innovation in the Public Sector was held on December 3, 2019 at the Cipriani College of Labour & Co-Operative Studies. The awards are an initiative of the Inter-American Development Bank (IDB) Group, and serve to recognise and reward areas of Service Excellence and Innovation within the public sector of Trinidad and Tobago.

The Minister further elaborated on the immense pride experienced by iCARE copping the People’s Choice award. “As a patriotic citizen of Trinidad and Tobago, it is heart-warming to know that an environmental initiative has been so warmly embraced by the public. We, all of us at the Ministry, have been working tirelessly to reinforce the message that “Environmental Pride is National Pride”, and to place the environment at the centre of social and economic development. The very special honour of having been voted ‘People’s Choice’ sends a signal to me that as a country, we are making a step in the right direction towards making environmental consciousness and sustainability part of our culture.”

The iCARE initiative, managed by the Environmental Management Authority (EMA) attached to the Ministry of Planning and Development, is the first national recycling initiative in Trinidad and Tobago, and works on transforming the national perception and behaviour with regard to recycling. With over 500 collection sites nation-wide, many of which can be found in primary and secondary schools and public spaces, the iCARE programme has been able to divert over one million (1,000,000) bags of recyclable materials from our nation’s overburdened landfills, and is steadily changing the understanding of plastic waste from “garbage” to a meaningful resource.

iCARE was among eight (8) finalists for the prestigious President’s Awards, featuring initiatives that have high national impact, ranging across sectors including Health Care, Education and Crime Reduction. Each of the nominated projects seeks to address national social issues and improve processes and service delivery, which ultimately will better the lives of the people of Trinidad and Tobago. These projects include the Enterprise Model, employed by the Trinidad and Tobago Police Service, Central Division, which has reduced by 82% the top three (3) serious crimes in the community of Enterprise Chaguanas, and has opened up the community to social and economic development. Similarly, the Directorate of Women’s Health initiative under the Ministry of Health has not only succeeded in reversing negative maternal and neonatal health trends in Trinidad and Tobago, but has also successfully achieved Trinidad and Tobago’s 2030 Sustainable Developmental Goals for Maternal and Neonatal Mortality twelve (12) years ahead of schedule.

Noting that each of the projects focuses on putting people first, Minister Robinson-Regis went on to state that the “President’s Awards finalists’ projects perfectly capture the essence of what Vision 2030 represents - positive and progressive actions which propel Trinidad and Tobago forward. The developmental thrust of a nation is hinged on projects such as these, which inculcate strong nation-building values, attitudes and behaviours while nurturing our greatest asset, people.”

“There are times in the development path of a country when extraordinary challenges demand an equally compelling response. To all the finalists, thank you for your continued outstanding service to our country.”

In 2020, the iCARE initiative will partner with the Tobago House of Assembly (THA), Division of Infrastructure, Quarries and the Environment to expand the recycling thrust into Tobago.