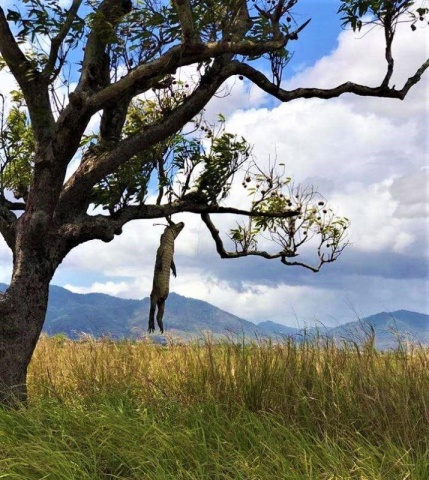 Image being circulated of a caiman hanging from a tree in Cunupia.

Minister of Planning and Development the Honourable Camille Robinson-Regis, who has responsibility for the environment viewed with horror and concern recent photographs and a recent Trinidad Express article of a slaughtered caiman hanging from a tree.  https://www.trinidadexpress.com/news/local/what-a-sick-and-inhumane-society/article_2424e1c0-61e6-11e9-9c9e-a373104cf3e8.html
The Minister felt that it is especially disconcerting that this dastardly act has occurred out of the hunting season and even if it were the hunting season, this was not a humane hunting practice.  Minister Robinoson-Regis has engaged the necessary authorities asking for a full investigation and fully supports Police Commissioner Gary Griffith’s recent initiative of having the police work hand in hand with animal welfare groups and communities to enforce animal cruelty laws.
According to Section 79 of the Summary Offences Act it is an offence to ill-treat animals.
"79. (1) Any person who cruelly beats, ill-treats, starves, over-drives, overrides, overloads, abuses, tortures, or otherwise maltreats any animal is liable to a fine of four hundred dollars or to imprisonment for two months.
Minister Robinson-Regis will give immediate attention to increasing the penalties for such acts.
On April 26th, 2018, the Government approved the National Biodiversity Strategy and Action Plan (NBSAP) for Trinidad and Tobago. This revised NBSAP provides an update on the status of biodiversity in T&T, whilst taking into consideration the value of biodiversity and ecosystem services to human health and well-being; the threats to biodiversity and the legal and policy context in which this NBSAP will be implemented.  Acts such as this definitely serve to undermine the value and importance of all facets of our fragile biodiversity to our lives in Trinidad and Tobago.
The Minister hopes that  the publication of this cowardly and heinous act will serve as a moment of resurrection in all our citizens with respect to concern for our environment and will foster citizen participation and reporting of this and similar acts so that these perpetrators and any others who commit such offences can be brought to justice.
Minister Robinson-Regis is also calling on all hunting groups, NGOs, communities to condemn such behavior and dissuade members of the public from acting in this manner.