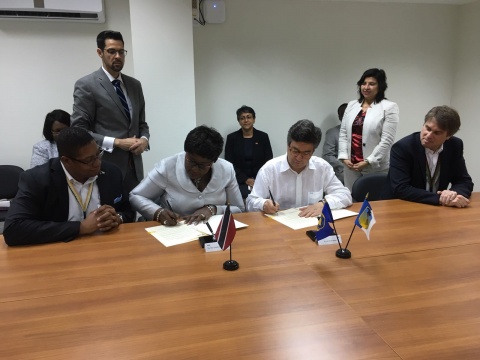 On the occasion of the 58th Annual Meeting of the Board of Governors of the IDB currently being held in Paraguay, the ceremonial signing for the US$40mn loan from the IDB – Support to Strengthen Trinidad and Tobago's Public Financial Management System, was undertaken on Thursday March 30th 2017, during the bilateral meeting. The contract was signed by the Minister of Planning and Development, the Honourable Camille Robinson-Regis, Governor on the Board of Governors of the IDB and President Luis Alberto Moreno, President of the IDB. The objective of this five year programme, which will be executed by the Ministry of Finance, is to improve the efficiency and effectiveness in the allocation of public resources. The project is consistent with the Government’s strategy towards restoring and maintaining economic stability and budgetary reform, including the Trinidad and Tobago Revenue Authority.

The Honourable Minister thanked the Bank and in particular the IDB’s Country Office for assisting Trinidad and Tobago over the past year in streamlining the loan portfolio now valued at approximately $524MUS with an improved implementation rate of 35%. The Minister noted that the portfolio is leaner, achievable and sets the basis for future engagement with the Bank. Notably the Country Strategy Programme 2016-2020 was approved and this programme sets the framework for a strengthened programme for Trinidad and Tobago.

The Minister took the opportunity to thank the President for the decision to establish the Hub of the Inter-American Investment Corporation – the IIC, in Trinidad and Tobago. The IIC will focus on the Trinidad and Tobago private sector market which will result in greater positive partnership for development. The bank identified new areas for private sector involvement including, technology, media and telecommunication, tourism and Tobago specific activities such as agriculture, and coast management.

One of the key matters to addressed at the 58th Meeting is the establishment of the Multilateral Investment Fund III. The President expressed his continued support for the development of Trinidad and Tobago and for the continued leadership in the operations at the Bank and the Region. The meeting continues until Sunday 2nd April 2017. Supporting the Honourable Minister at this meeting are a team of advisors, including Ms. Joanne Deoraj, Permanent Secretary (Ag.) at the Ministry of Planning and Development and Alternate Governor for Trinidad and Tobago on the Board of Governors of the IDB; Ms. Omatee Geawan-Ramdass, also from the Ministry of Planning and Development; Mr. Ancil Dennis, Assistant Secretary at the Tobago House of Assembly; Mr. Alister Noel and Mr. Kevin Smith from the Central Bank of Trinidad and Tobago and Ms. Shezelle Bowman from the Ministry of Finance.