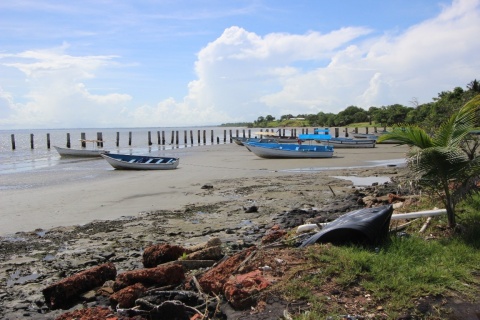 Thursday May 18, 2017-
Pollution of coastal waters has proven to be an ongoing and pervasive problem in Trinidad and Tobago, especially in the Gulf of Paria along Trinidad’s West Coast according to the recently released report on the State of the Marine Environment Trinidad and Tobago 2016 (SOME).  This report was launched to the Minister of Planning and Development, the Honourable Camille Robinson-Regis on May 18 at the IMA’s headquarters in Chaguaramas.  The Report further adds that this pollution problem is mainly land based, where run-off and effluent from terrestrial sources and activities have negatively affected coastal sediment and water quality.

The SOME Report is the first of its kind in Trinidad and Tobago and provides a scientifically grounded understanding of the condition of some of Trinidad and Tobago’s important coastal and marine ecosystems, habitats and species.  This report provides scientifically based data and evidence to support natural resource management and integrates local scientific research into the science-policy nexus.  Minister Robinson-Regis, in her speech stated that Cabinet immediately recognized the importance of this ground breaking IMA report in arresting further degradation of our coastal and marine environment and approved the document with an accompanying plan for action.  According to Minister Robinson-Regis, ‘it is estimated that almost 80% of all socio-economic activities and 70% of Trinidad and Tobago’s population are located either along, or in close proximity to the coast’, she added that in our quest for economic prosperity we have degraded the very same natural resources that sustain us, and on which we depend for our future.  The Planning Minister has on many occasions expressed her drive to correct or arrest the negative activities contributing to the degradation of our environment.

The use of this research will be used for policy intervention among other actions to contribute to the resuscitation of our marine environment.  Some other actions to be taken in the near future include:
1. The appointment of an Inter-ministerial Committee to oversee  the Action Plan for implementing the Integrated Coastal Zone Management Policy Framework to mitigate negative impacts on the coastal and marine environment. This would require the formalization of institutional arrangements that foster better co-ordination and integration among agencies.
2.         Installation of the Water Quality Monitoring Buoy in collaboration with Microsoft in the Central Gulf of Paria.
3.         Production of education material on land-based pollution and waste management.
4.         Development of a Marine Spatial Plan for the Northwest Peninsula of Trinidad.

Becoming operational in 1978, the IMA is the only multi-disciplinary coastal, marine and environmental research organisation in CARICOM established to conduct inter-disciplinary studies and is a key research institution forming part of the Ministry of Planning and Development’s mandate.