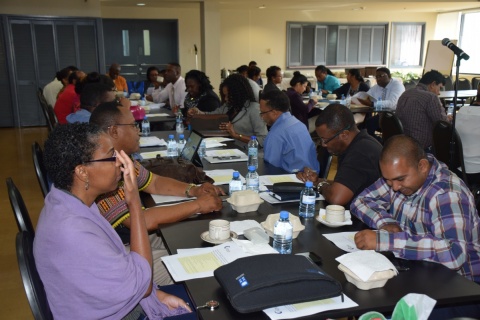 Participants in an Infrastructure Mapping WOrkshop on February 21 and 22, which focused on Public Private Partnerships.

The Honourable Camille Robinson-Regis, Minister of Planning and Development announces that the Government of Trinidad and Tobago is actively focused on deepening the employment of Public Private Partnerships (PPP) for large scale developmental projects in Trinidad and Tobago with the aim of further reducing capital expenditure and wastage; delivering high quality responsive infrastructure services to citizens; and expanding the resources and professional expertise used to develop and implement national development projects.  A Public-Private Partnership (PPP) is a long-term contract between a private party and a government agency, for providing a public asset or service, in which the private party bears significant risk and management responsibility.

Throughout the Caribbean, the Caribbean Development Bank (CDB) has identified 28 projects in the PPP pipeline as of January 2019 in some stage of active progress, most of them are in energy, mostly renewable energy; construction and transport.  The CDB identified 7 projects in Trinidad and Tobago which are at some advanced stages of PPP implementation.  The seven projects identified by the CDB include the Tobago Airport, the Tobago Cancer Care Centre, Tobago’s Low Income Housing Projects, the new wing of the Port of Spain General Hospital, Wind and Solar Power Production projects, the integrated solid waste system and the Waste to Energy Project.

The early cost estimates calculated by the CDB for these seven projects amount to US $750 million, however, the Government has managed to reduce most of this estimated cost by over 50% through PPPs and a mix of grant and loan funding.  Trinidad and Tobago’s Public Sector Investment Programme, Government’s medium term investment tool has approximately TT $5 billion allocated for capital investment projects for the 2018/2019 fiscal period.

Minister Robinson-Regis actively engaged the CDB in 2018 at the CDB’s Annual Board of Governors Meeting, expressing interest in undertaking an Infrastructure Mapping Workshop focused on PPPs.  It is through this intervention that this workshop is taking place on February 21 and 22 through the Socio-economic Policy Planning Division of the Ministry of Planning and Development in collaboration with the CDB and the Inter-American Development Bank (IDB). The Minister states that the intention of the workshop essentially is to focus on key infrastructural bottlenecks which have impacted T&T’s economic growth and to propose strategies for Government agencies, looking at real world projects either currently underway or in the pipeline and how best Trinidad and Tobago can proceed with implementation using PPPs. Minister Robinson-Regis is certain this will help build capacity in the wider public service.  This workshop involves over 60 representatives in senior management and project management levels from central government and the Tobago House of Assembly.

The Government sees this PPP training as very critical given current fiscal constraints and the need for greater value for money in the implementation of national projects. Minister Robinson-Regis stresses to participants and other government project managers the importance of capitalizing on this opportunity to improve the way our projects work and are implemented, and to focus on utilizing new ways and means of addressing our challenges understanding that we cannot continue to operate along the same lines as we have in the past.