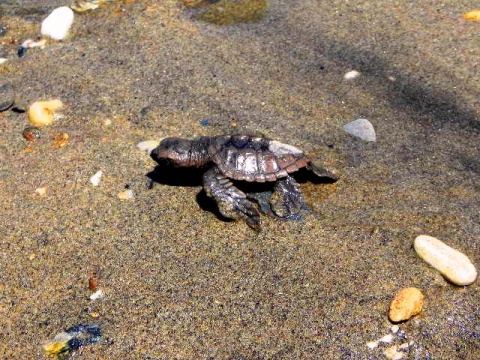 May 12, 2017
The Environmental Management Authority (EMA) expressly condemns the recent slaughter of several protected sea turtles in Tobago. It is regrettable that this environmental crime took place despite the legal protection afforded to these endangered species with the declaration in 2014 of five (5) species of sea turtles as ‘Environmentally Sensitive Species’. The EMA recognises the tremendous progress made in the fight to protect these endangered creatures with the partnership of civil society, the State and local communities working hand-in-hand to bring about positive change. The number of recorded poaching incidents has dramatically decreased in recent years and despite this setback, all parties remain committed to achieving the goal of zero slaughter.

This senseless slaughter of over two dozen juvenile Green Turtles, with the heads washing ashore at Kilgwyn, Tobago, while it appears to be a single incident gives rise to serious concern. It reminds us, that despite the remarkable work of civil society organisations such as ‘Save Our Sea Turtles’, ‘Turtle Village Trust’ and ‘Nature Seekers’, in conjunction with the network of community volunteers who tirelessly patrol and protect turtle nesting sites across Trinidad and Tobago, ultimately, individual conscience and personal responsibility are the critical success factors to achieve our goal.

Despite the efforts of the Government to afford legal protection to sea turtles via the Environmentally Sensitive Species Rules 2001 with the designation of five (5) sea turtles as ESSs and the removal of the provision for hunting under the Fisheries Act, incidents such as this have the potential to do irreparable damage to the international image and reputation of Trinidad and Tobago. In the case of Tobago, the damage can be even greater, given that the mainstay of the Tobago economy, tourism, is undeniably.

linked to preservation of the environment and its inhabitants (with sea turtles being an important species among them).
While the investigation into this matter progresses, the EMA urges citizens to provide the Authorities with any information that they may have on this poaching incident. The EMA also urges individuals who may be aware of friends, family members or neighbours who are involved in, or are planning to illegally poach sea turtles, to intervene to help stop this heinous practice.

The EMA also reminds the public of Section 70 (2) of the EM Act Chap 35:05 in relation to the “criminal offence for knowing or reckless endangerment” of an Environmentally Sensitive Species which states:
“70. (1) Any person who through the release or handling of any pollutant or hazardous substance, or the arrangement for another person through any contract or other agreement to release or handle any pollutant or hazardous substance, knowingly or recklessly endangers human life or health, commits an offence, and is liable on conviction on indictment, to a fine of one hundred thousand dollars and imprisonment for two years.

(2) Any person who knowingly or recklessly undertakes or conspires to allow any activity in an “environmentally sensitive area” or with respect to an “environmentally sensitive species” designated under section 41, which may have an adverse impact on the environment within such area or on such species, commits an offence and is liable, on conviction on indictment, to a fine of one hundred thousand dollars ($100,000.00) and imprisonment for two years.”
Members of the public with any information pertaining to this incident or any other environmental emergency can make a report via the following:
 EMA: Tel. 680-9588 and 285-4362 or complaints@ema.co.tt